If you can walk more than a few steps in Key West without seeing a reference to Hemingway, look around. You may not be the southernmost city. Ernest Hemingway has been memorialized, fantasized, and in most cases fictionalized more than the number of words in the many novels he wrote.

Key West is by far one of our treasured destinations. Just as in Hemingway’s decade of residence, the vibe continues to be tropical, tolerant, irreverent, and creative. Until his death in 1961, the name Hemingway in Key West was most frequently found in the bookstore and not on street corners, t-shirts, banners, billboards and backstreets.

Key West found a way to promote a mortal into a mythical figure as a headliner for tourism in the last 60 years. It is working, and fun, albeit something Ernest Miller Hemingway would have most likely detested! Times were difficult in 1930s Key West. Roads, sanitation systems and water were a constant problem. These conch homes were typical.

During the Hemingway years (1929-1939), Key West was in desperate condition. In the 1830s, Key West was the richest city in the country. The next hundred years were not kind. The Civil War brought political division. The largest cigar-making industry in the world moved to Tampa. The sponge docks were moved to Tarpon Springs. The Great Depression left people homeless and penniless. Prohibition shut down the alcohol importation, and finally, Key West went broke. Consequently, the state of Florida had to appoint a receiver to take over the island in 1934. The town could not pay firemen, policemen and city employees and the state stepped in. Pauline, Hemingrun-downfe, turned a run down old home into a showcase with Key West’s first swimming pool in 1933. The home is Key Wests top attraction today.

Amid all the unfortunate circumstances in Key West, Hemingway and his second wife Pauline moved to Key West in 1929. After a brief visit in 1928, they wanted to come back. Hemingway loved the remote tropical feel of the island. At the time, there were no roads to bring throngs of visitors. People were poor, but Hemingway married into a rich family and could fuel his need for privacy to write. His fame was limited at the time. His notoriety primarily came from articles written in Paris. Today this is 314 Simonton Street. This was a car dealership in 1928 where Hemingway stayed in an apartment above the dealership waiting on his car to arrive by ferry.

His first visit to the island was to pick up a car Pauline’s uncle bought for them. The car was a week late coming from Miami by ferry. The car dealership apologized by offering him an apartment above their dealership. While waiting for the car at his small abode above 314 Simonton Street, the location proved to be perfect for roaming the streets and docks of Key West. The result was Hemingway fell in love with the island. Subsequently, his ten-year relationship with Key West was longer than some of his four marriages.

What Hemingway found and loved is still in Key West today. There was, and is, a level of tolerance for being different. There was the heaviness of tropical air that makes you know you are alive and vibrant. There were the clear blue waters that seem to go forever in any direction. There were the flora and fauna that rich or poor could equally visualize. Hemingway’s passion for deep sea fishing could be cultivated and perfected. All of the above is much the same as Hemingway’s Key West.

After discovering Key West on the recommendation of a fellow writer in Paris, Hemingway spent most winters on the island paradise for a decade. Pauline’s family bought them the house at 907 Whitehead Street. With Pauline’s skill and money, they created a home for their three children and a haven for the writer to pursue some of the best books and short stories of his career. Hemingway’s Key West was “St. Tropez of the poor” as he wrote to another friend. Hemingway and Josie Russell (aka, Sloppy Joe) did a lot of fishing and drinking together.

While a prolific writer, Hemingway was just as resolute with his fishing, boating and drinking. Unknowingly, he created what was called locally the “Mob”. These were friends that hung with the worldly sportsman that Hemingway became. He had a collection of charter captains, fishermen, bar buddies, boxers, foreign-based writers, and his most famous local compadre, “Josie” Russell. Josie is better known as the owner of Sloppy Joe’s where the Mob hung out.

Joe “Josie” Russell ran a speakeasy during prohibition at 428 Green Street. Today that address is Captain Tony’s. This location was the first bar owned by Josie Russell that he named Sloppy Joe’s after prohibition ended in 1933. Then in 1937, Josie and customers moved the bar a block away. Overnight, as a result of a dollar-a-week rent increase, friends picked everything up and moved. For a few drinks, Sloppy Joe’s was relocated to the current location at 201 Duval Street.

Hemingway’s decade in Key West impacted his writing in many ways. One of those ways was that many of the characters he created resembled the people he befriended in Key West. In Fact, To Have and Have Not, Hemingway’s book and subsequent film, clearly were from his charter boat and fishing experiences in Key West and Cuba. His main character was most likely Josie. In 1935 people searched for days to find victims of the massive hurricane. Hemingway visited the area around Marathon and it deeply scarred him.

One of the events that soured his relationship with government officials was the 1935 record hurricane that killed 400 WWI veterans working on Flagler’s East Coast railroad. Hemingway felt the veterans should have had a way out of the Keys.  He ranted the government should have provided an escape before the estimated 250-mile-per-hour winds caused death and havoc. Hemingway’s disgust came after viewing the devastation and bodies scattered through the middle Keys.  Next, the state of Florida took over Key West at about the same time. But Hemingway distrusted their presence. Hemingway’s pulpit as a writer and frequent criticizer of government in general, caused the FBI to unjustly keep an eye on him.

Many accounts of Hemingway’s days in Key West forget he was frequently traveling. He loved Wyoming and the big game available. Cuba was a frequent stop for fishing and partying adventures. Bimini was a favorite for marlin and tuna. In 1933 Hemingway and Pauline traveled to Africa for 10 weeks. Spain was a destination he loved as he developed an interest in bullfighting which lead to his book Death in the Afternoon.

By 1939 Hemingway was about to depart Key West for good. It was clear that war was brewing in Europe and his experience in WWI led him to become a war correspondent in WWII. A year earlier, the Overseas Highway was completed to Key West, bringing more tourists and the notoriety Hemingway tried to avoid. He only visited Key West a couple of times after that, but the family retained ownership of his home on Whitehead Street until his death. 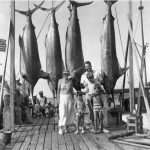 It wasn’t unusual to see the Hemingway family on the docks of Key West. 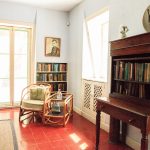 A visit to Hemingway’s home shows his writing space – way too neat and organized for him! The first Sloppy Joe’s was a block west on Greene Street. Today it is called Captain Tony’s.

A visitor’s guide to reliving Hemingway’s Key West is below.

One of Hemingway’s first haunts was what is now Captain Tony’s. This bar was originally a speakeasy owned by Josie Russell. After prohibition, the legal bar became Sloppy Joe’s.

Hemingway’s first visit included a stay at 314 Simonton Street. Today, the building still stands even though it has been remodeled several times. Visually, you can imagine the Ford dealership below and the apartment above. This base was easy to see all the highlights of Key West in 1928.

Hemingway kept his beloved boat Pilar at the navy yards at the end of Caroline Street. While there is not much to see there today, here is a video about his custom built Pilar.

One of the most popular things to do in Key West today is to visit the unique Key West Cemetery. Under normal circumstances, this may not be fun, but nothing is normal in Key West! This cemetery is not like most. Here you will find some of the Mob that surrounded Hemingway. Headstones include Joe Russell (aka, Sloppy Joe) and Kermit “Shine” Forbes, a prizefighter who was a Hemingway friend. Many other epitaphs from strange to hilarious are throughout the cemetery. Many of the “residents” of the Key West Cemetery were part of Hemingway’s Key West. The most famous of Hemingway’s jaunts around Key West was his friend’s bar Sloppy Joe’s.

Of course, the most famous of the Hemingway hangouts is Sloppy Joes. You should check out the walls and décor of this Duval Street tradition. There are dozens of pictures and memorabilia of Hemingway’s Key West. In truth, many of the older pictures include the time before Sloppy Joe’s moved to this location in 1937. By 1939 Hemingway had almost deserted Key West.

Ernest Hemingway became the face of Key West. Marketing experts needed something to ensure a future stream of tourists from around the world. They thought, why not use an internationally known, and Pulitzer prize-winning writer, whose legacy included his love for Key West? Hemingway’s death in 1961 fueled the needs of Key West’s future. The result is obvious as you visit the small island.

Today, annual events include Hemingway Days, Hemingway 5K Run, Hemingway Fishing Tournament, and several other events based on the writer’s name. Inspired by Hemingway’s productive writing in his Key West days, there are numerous artists, writers, musicians, and people of all art forms that use the island for their tropical inspiration.